WE HAVE ALWAYS USED VANCOUVER AS A PRECURSOR TO OUR MARKET IN NANAIMO, BUT BASED ON HOW CLOSE NANAIMO NAD VANCOUVER WERE IN THE HEAT OF THE MARKET, THE NUMBERS ARE GOING TO BE COMPARABLE. OUR PRICES DID NOT GET TO THE EXTREMES THAT WE SAW IN VANCOUVER, BUT THEY WERE EXTREME FOR NANAIMO. - SHAWN

Last month's Greater Vancouver area home sales dropped by about 35 per cent since last June and 16 per cent from May 2022 as houses remained on the market longer and interest rates rose, the region's real estate board said Tuesday.

The continued easing the Real Estate Board of Greater Vancouver detected last month translated to 2,444 sales in the region in June, down from 3,762 during the same month the year before, and 2,918 homes in May 2022.

The board's chair, Daniel John attributed last month's sales dip — 23.3 per cent below the 10-year June sales average — to mortgage rates which have increased in sync with interest rate hikes and a 39-year high inflation rate. 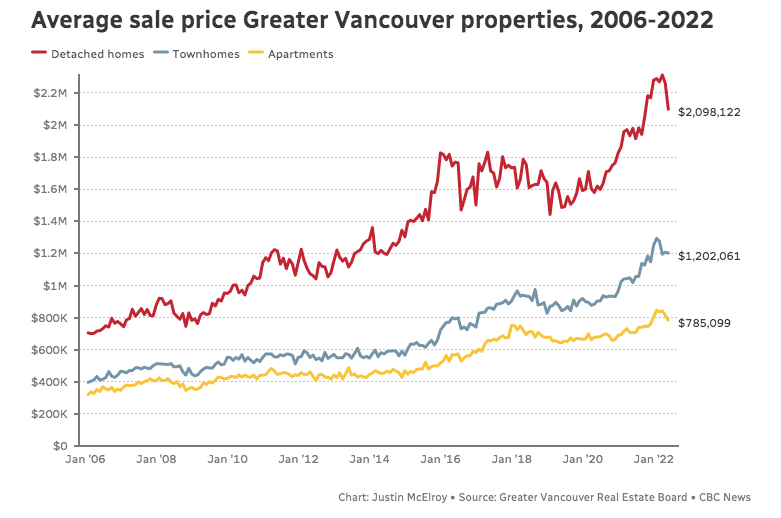 Dropping Prices
"Homebuyers have more selection to choose from and more time to make decisions than they did over the past year,'' John said in a statement

Such observations signal a shift in the market, which remains one of Canada's priciest and most in-demand regions. However, recent months have seen some of the heated conditions the last two years of the pandemic delivered start to fade.

Realtors report it is now routine for buyers to sit on the sidelines of the housing market as they wait to see if conditions will ease even further, while sellers are taking time to adjust to a market that is not as frenzied as it once was.

Such behaviour indicates the market is shifting in favour of buyers, said Tirajeh Mazaheri, a Coldwell Banker Prestige Realty agent in Vancouver.

Gone are the days when properties would be sold in days — or sometimes hours — and garner multiple offers.

"Now, they're sitting on the market for a few weeks to a few months and people are not touching it,'' Mazaheri said. "It's a very big, drastic change.''

She's noticed prospective sellers are taking note of that pattern and the Bank of Canada's promises of more interest rates to come and deciding to wait it out.

"Anyone who can hold onto their property is holding onto it right now, waiting to sell when the market shifts again and goes back up, possibly at the end of this year or beginning of next year,'' she said.

Those that are wading into the market are still fetching more money for their homes than they did last year but less than they would have months ago.

"We're seeing downward pressure on home prices as we enter summer in Metro Vancouver due to declining homebuyer activity, not increased supply,'' John said, in a statement.

Some of that decline stems from prospective buyers, like a couple Mazaheri is representing, who have lost some of their edge as interest and mortgage rates increased.

"They said, 'the interest rates have gone up so much that our purchasing power is a lot less now' and again, they are deterred from buying,'' said Mazaheri.

"They said, 'we want to buy something and now our budget, our price point is much lower,' so definitely, it has impacted a lot of people.''

OCTOBER 2022 MARKET STATSWe see the market start to stabilize. The posted sales in September saw prices move in a downward trend, and the volume was ...Read More

BC REAL ESTATE UPDATE Introduction It's been a while since we last checked in with the BC real estate market. Things have certainly changed since ...Read More